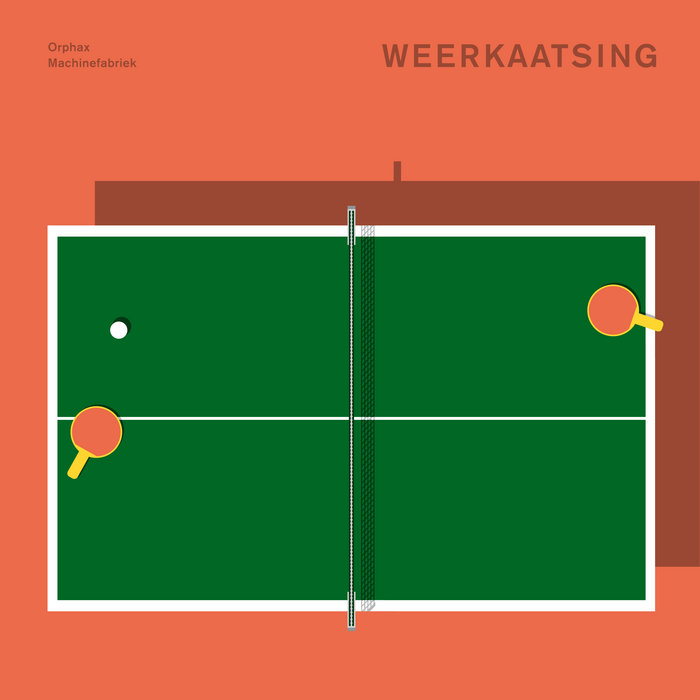 Sergio Parakovsky If you can tune in to the material(s) used in this album it is sounds very good, in my humble opinion. And artwork is attractive. Favorite track: Spiegeling.

Weerkaatsing is the first collaboration by Rutger Zuydervelt (Machinefabriek) and Sietse van Erve (Orphax), both active players in the Dutch experimental electronic music field. While their paths did cross many times at concerts either as visitors or as performing artists, never before these prolific musicians got together. And as with so many collaborations also this one has a story behind it:

Reflectie (Orphax)
The idea behind this collaboration started in 2007, when Rutger released his EP Stofstuk and following this the remix album Kruimeldief. For years since the release I was intrigued by this little piece and the various remixes, and always had the idea of making a remix myself (and actually to start a series of unrequested remixes). Finally in 2016 I took the time to really work on this Stofstuk remix. With some magic and other forms of witchcraft I created the almost 20 minute long drone piece Reflectie, based solely on the Stofstuk piece. I tried to put a real Orphax touch to the work, but without losing the true Machinefabriek sound. As such it really felt for me as if we did a collaboration; and it was screaming for more. So I told Rutger about this and after I sent him the piece the idea came he would also remix one of my works. And from there this collaboration really kicked off...

Spiegeling (Machinefabriek)
The first time I met Sietse was at a gig in Utrecht, probably in 2006 or so, but I’m not sure. Since then, I saw him at so many gigs… one of the regulars of the scene, I’d say. Anyway, in 2007 I invited a load of artists to make a remix of my track ‘Stofstuk’. The results appeared on the album ‘Kruimeldief’, but what was missing was Sietse’s remix. At least, that’s what I found out recently. Apparently he had been ‘secretly’ working on a beautiful 20-minute remake of my track. Damn, it was too nice not to do anything with it, so we decided that I should return the favour and do a remix of an Orphax piece. I choose 'Geluiden van de Eerste Dag’, of his 'Tragedie van een Liedjesschrijver’ album, the piece that resonated the most with me. And the rework was done in no time. Not because I was in a hurry, but because the basic material of the track was so grateful to work with. I added a few looped snippets of violin which I recorded at a rehearsal (for another piece), and these worked perfectly with Sietse’s sounds. ‘One plus one equals three’, I’d say (cliché or not).

Weerkaatsing (Together)
So then we had two remixes. We had already decided to release this somehow, but it didn’t feel complete yet. That’s when ‘Weerkaatsing’, the title track, came to life. The most ‘collaborative collaboration’, and our favourite track of the album. It’s like the table tennis illustration on the cover; we kept bouncing sounds back and forth, until the track was finished. Which, again, didn’t take long. We were clearly on the same wavelength, and together with the other two tracks, I think it’s a really solid drone album.


Mastered by Jos Smolders at EarLabs