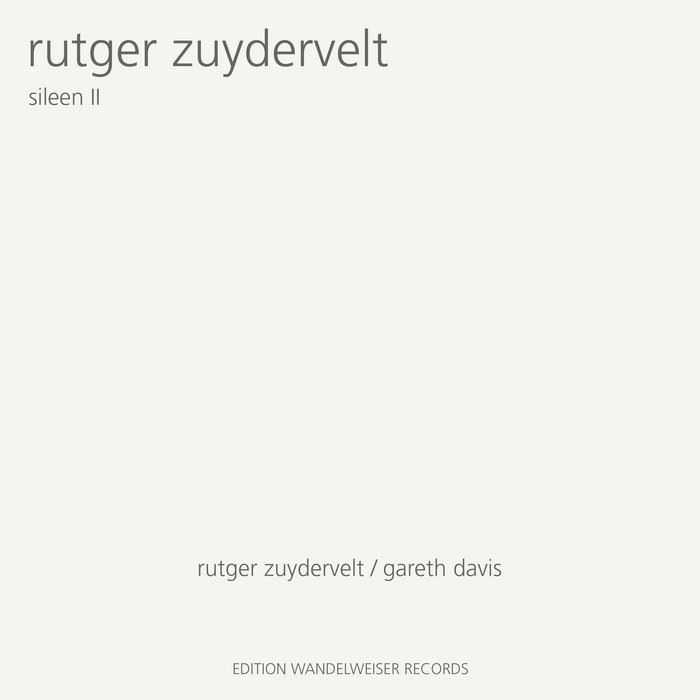 Sileen II was recorded in the same pitch and tempo as its predecessor, then slowed down in post-production to half its speed and one octave lower.

In 2016 I was commissioned by Musica, to compose a piece for their sound/art festival OORtreders (in Neerpelt, Belgium), and to perform it with 50 members of a local music school. So I wrote ‘Sileen’, a piece based on three groups playing a set of swelling notes; overlapping in different combinations each time. A fairly simple score to play, but one that asks a lot of concentration from the performers (and a lot of breath for the horn players - one kid fainted during rehearsals). A recording of that performance can be found here: soundcloud.com/machinefabriek/sileen

I’ve been thinking of recording a studio version of this piece for a long time, and finally decided to do so, with the help of bass clarinetist Gareth Davis. I decided to not go for a big orchestral version like at OORtreders, but to approach it in a more intimate way, using only Gareth’s clarinet and some electronics for extra colour. The radio static and field recordings of the original were also abandoned, to make the whole thing more transparent and focused.

Compared to the busy, slightly chaotic performance in Belgium, this new version is almost intimidatingly sparse, even more so ‘cause at the last minute I decided to slow down the new version to half its speed, which gave way to more details like intriguing overlaps and beating frequencies.

The structure of the composition is very simple. There’s three groups, and each have 4 or 5 sets of repeated chords of exactly one minute - fading in and out like a wave. Each set of repetitions is followed by a silence of the same length before presenting the next set. Since the amount of repetitions is different for each group (2, 3, and 4 times), the overlap shifts and differs each time.

More then forcefully composing a beautiful piece of music, the structure of Sileen II is more about simply presenting these different, isolated combinations of tones. When all the options are heard, there’s a point where all group have a minute silence at the same time. Then the peace ends with a final (long) chord. I guess that finale is my composite touch to an otherwise automated composition.

While the original Sileen piece was written for a big group of musicians, I wanted this new version to be more compact and focused. I started with creating the piece with electronic sounds, and then ask my regular collaborator Gareth Davis to record the different notes of the piece, for me to have a library to work with, and to add a more human touch to the composition.

Originally, the piece was actually half it’s length (and an octave higher). After spending some time mixing Gareth’s bass clarinet with my electronic tones, I still wasn’t convinced. It was felt hard to actually turn this into a piece that was pleasant or intriguing enough for me to listen to. I really liked the systematic aspect of the composition, but despite the slowness of the piece, it still felt too hushed and uncomfortable. But then a too-simple-for-words idea came to the rescue. By simply slowing the piece down to 50% I suddenly felt the click. This was it. Now the chords where sustained long enough for the listener to actually engage with them, to have time to sift through the different tones, focus on the beating timbres or simply ‘float’ on tone-clusters. Lowering the pitch also gave the piece a much warmer and deeper sound. Great how such a simple intervention changes so much. The piece was finished.