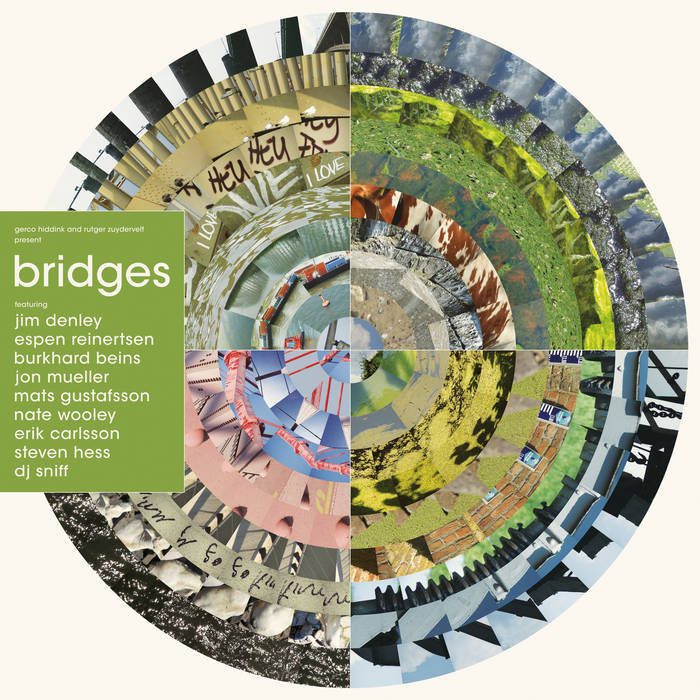 Back in 2011, Gerco Hiddink participated in a design contest, and made a really nice album sleeve, for a fictional album. It ended up second place, and then… well, then nothing. At first.

We decided to make the record real, and came up with the idea of making field recordings at four bridges, and then have four pairs (one per bridge) of improvisers react on these recordings, without being able to hear each other. The sound of each bridges was literally the link between two players.

Obviously we were stoked that we managed to assemble an amazing group of musicians: Jim Denley with Espen Reinertsen, Burkhard Beins with Jon Mueller, Mats Gustafsson with Nate Wooley and Erik Carlsson with Steven Hess.

Staying true to the original sleeve concept, the music ended up in a super lavish double LP picture disc set, with photos (of each location of the bridges) that form short stop-motion films when spinning on a record player. Quite an (expensive) undertaking, but we managed to pull it of…

The LP was presented live at Worm, Rotterdam, with performances by Burkhard Beins and special guest DJ Sniff, who used the Bridges LPs as a sound source in his performance.

The Wire: "There’s an obvious fascination in hearing physically distant instrumentalists responding sensitively wo the same set of auditory prompts in ways that suggest they are playing in close proximity. Beyond the artifact, Hiddink and Zuydervelt offer a conceptually viable articulation of place in an age of downloads and diminished spatial barriers to exchange communication".
How’s that?

The LP is sold out for some time now, but the download is unlimited (and feautures the DJ Sniff ‘remix’)